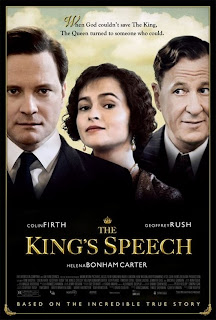 Hi everyone, my first blog is going to be based on a movie that saw recently called The King’s Speech.

Movie Info:
Release date: Friday December 10. 1010,
Tuesday April 19th 2011 (on DVD)
Genre: Drama
Running Time: 118 min.
Director: Tom Hooper
Producer: Lain Canning, Gareth Unwin, Emile Sherman
Screenplay: Davis Seidler
Cast: Colin Firth, Geoffery Rush, Helena Bonham Carter, Guy Pearce, Michael Gambon, Timothy Spall, Jennifer Ehle, Derel Jacobi
Synopsis:
Based on the true story of the Queen of England's father, King George VI (Colin Firth), who unexpectedly becomes King when his brother Edward abdicates the throne. Speech therapist Lionel Logue (Geoffrey Rush) helps the King find a voice with which to lead the nation into war. [Tribute.ca]
My review:
I have to admit the previews for this movie looked rather dull to me even though the media hyped it up and repeatedly mentioned that this film is a major contender at the Golden Globes. So today despite my first impressions I buckled down and watched it. Unfortunately for me my first impression proved to be correct. This movie was dull, boring and bland. It lacked a strong engrossing story line that could keep my attention and instead settled for being simple, straight forward and void of climax. Simply put it was about a king with a speech impediment who befriended his speech therapist; that was all there was to it, any other attempts to develop supporting story lines failed to captivate my interest.
Although I didn’t think the story line was fantastic and Oscar worthy I did appreciate the acting and the strong portrayals of the characters. Helena Bonham Carter seemed born to play the role of the queen; she exuded regal sophistication and the grace one would expect a queen to exhibit.
Colin Firth was also brilliant in his role as King George VI and Geofffery Rush was funny and fast witted. It may win a lot of awards but movies are very subjective so if you want to see what all the hype is about watch it and make your own assessment. J  I rate it 2 stars out of a possible five.
Posted by Erica D at 5:54 PM