These days life seems like a scary apocalypse movie. The COVID-19 pandemic has left many of us scrambling for toilet paper, non-perishable food and hand sanitizer but amidst the chaos it is important to remain calm, self-isolate and practice proper hygiene.

Hopefully life as we know will resume shortly but in the meantime those of us in lockdown need to be entertained so we don’t go crazy and start talking to the plants.

To help pass the time I’ve listed 21 of my favorite Netflix series that are great for binge-watching in your pyjamas. I will be updating this list frequently so you might want to bookmark it for later reference. 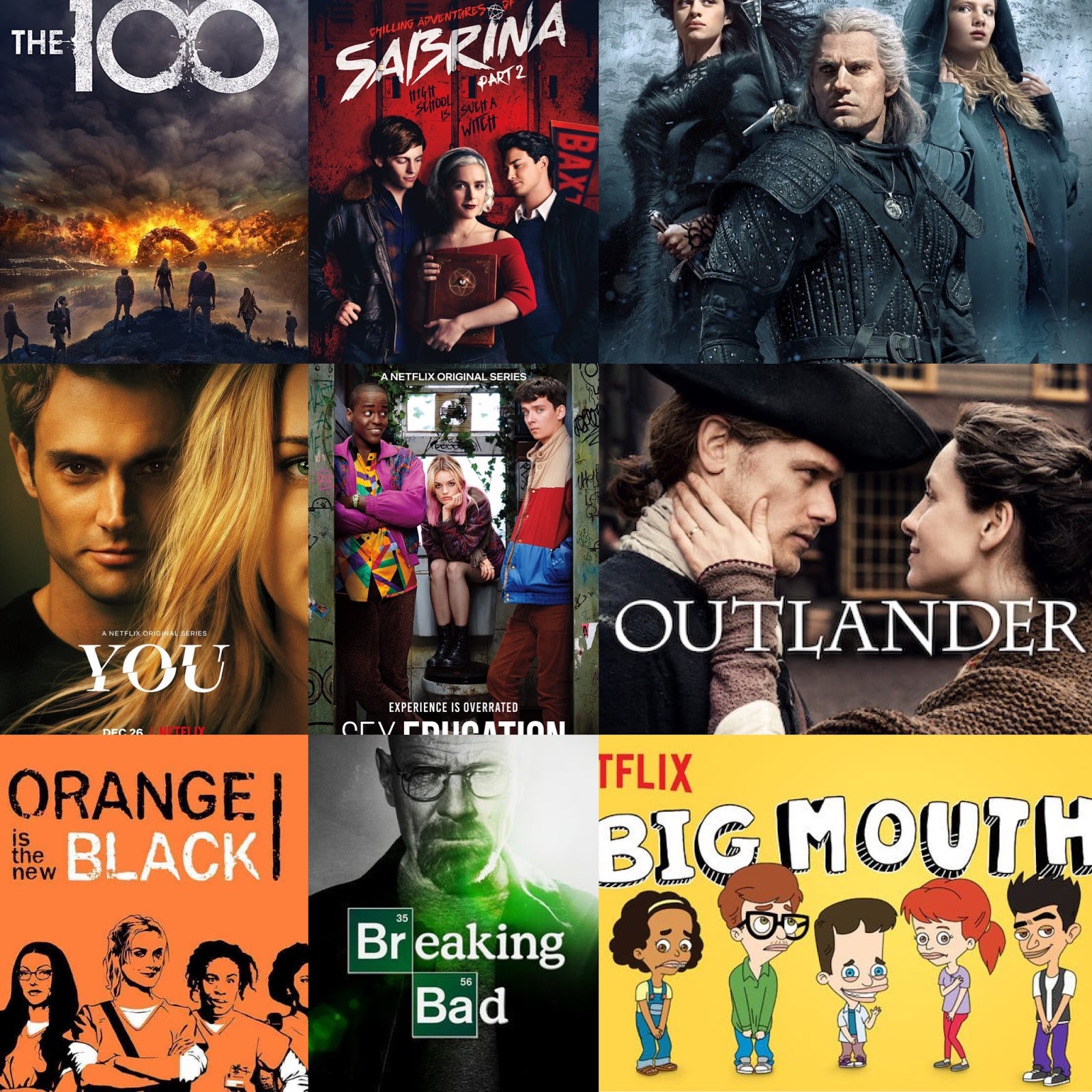 Grab a snack from your COVID rations (if you haven’t finished them), whip up a delicious cocktail (don’t be stingy with the vodka) and let’s begin.

1. The 100
I don’t know why this show isn’t more popular because it kept me entertained for months. I love high-paced, action packed, end-of-days, futuristic stories and this series has everything! Suspense, adventure, war, treachery, betrayal, spaceships, artificial intelligence and so much more! There are 6 seasons (which should keep you busy) and the last season might be released this fall (fingers crossed).

2. Stranger Things – Because who doesn’t love a good alien invasion from a parallel dimension.

3. Outlander – Passionate love story about time travel set in the 1700’s and 1940’s. I just wish Netflix didn't take so long to release the new seasons.

4. The Umbrella Academy – If you enjoy tales about misfit superheroes trying to save the world this show is quite good.

5. The Witcher – This popular sci-fi series might not make sense right away but give it time. The story comes together at the end and there is no shortage of scary monsters for Geralt to hunt.

6. Sabrina – A dark twist on the beloved teenage witch series. The final season isn't great but it's worth a watch.

7. Ozark - A suburban family is torn apart by crime, murder and mayhem. This show is well written, dramatic and always leaves you wanting more.

8. YOU – When it comes to manipulation, charm and persistent stalking, nobody does it better than Joe Golberg. This show is extremely creepy but oddly captivating.

10. Once Upon a Time – Grab some popcorn and watch your favorite fairytale characters come to life.

11. Dracula (mini series) – Dark, scary and well executed. There are only 3 episodes but this version is eerily realistic and skillfully directed.

13. Carmen San Diego (animated series) – Join Carmen on her crime fighting trek around the world and learn a few interesting facts along the way.

16. Dead to Me - Two women develop a deep bond but shocking secrets threaten to destroy them both.

18. Van Helsing - A woman awakes in a fortified medical lab and discovers that she may be the key to saving humanity.

20. Jane The Virgin – A comedic telenovela drama about a young woman who is artificially inseminated by accident.

21. Fuller House - If you grew up watching the Tanner family you'll love this funny, heartfelt sitcom.

22. The I-Land - A group of strangers wake up on a deserted island with no memory of who they are. Nothing is what it seems.

23. 72 Dangerous Animals of Asia (if you like nature documentaries that make your skin crawl).

24. This Is Us – An emotional drama that follows the lives of 3 siblings. Grab a tissue and get ready to cry your eyeballs out.

25. The Messiah - A political drama about a strange man who captivates a nation by performing miraculous acts of God. The story develops very slowly but leaves you wanting more.

26. Merlin - If you enjoy classic fairytales about kings, knights and sorcery, Merlin will satisfy your love of mythical adventures. Be warned, the special effects are terrible (a low-budget catastrophe) but each episode tells a bewitching story that is fun to watch.

27. The Final Table is a series for Food Network fanatics. Tops chefs from all over the globe face-off in an international culinary competition like no other.
28. Snowpiercer is a fast-paced thriller about earth's last survivors living abroad a luxury train during an ice age. Chaos ensues as passengers fight for resources during a power struggle.
29. Lost in Space - A futuristic tale about a family's journey to colonize a new planet after earth is destroyed. This show is well written, exciting and involves robots! What more can you ask for!?
30. Behind Her Eyes - This psychological drama starts off slow and mysterious but ultimately leaves viewers in total amazement. There is a plot twist that you won't see coming!
31. Superstore - A comedy about a group of people who work at a Superstore. I love the subtle unspoken humor and laugh out loud moments.
32. Bridgerton - A romantic period drama about eight close-knit siblings trying to find love and happiness in London high society. This is probably one of Netflix's most popular series of the year.

I omitted Riverdale because I only liked the first 3 seasons. After that things got weird, boring and downright stupid.

Another series that I hesitated to include is 13 Reasons Why. The show highlights important issues like teen suicide and bullying but the second season was unnecessary and the controversial content is not for everyone.

Love is Blind is one of the most popular reality shows on Netflix right now. I didn’t include it because reality TV is not really my thing and the entire "experiment" (if you can call it that) is flawed. I did watch the first season to see what all the hype is about but I fast forwarded to avoid repetitive conversations and forced drama. If you like the Bachelor you'll probably find this entertaining.

The first few season of The Walking Dead are amazing but the story slows to a crawl and eventually fizzles out. Seems like the writers ran out of ideas.

Shadow Hunters - I couldn't get over the terrible acting.

There are many great shows on Netflix but these are the series I’ve enjoyed.

What should I watch next? Message me on twitter and share your suggestions - @EricaChristinaD
Posted by Erica D at 3:23 PM